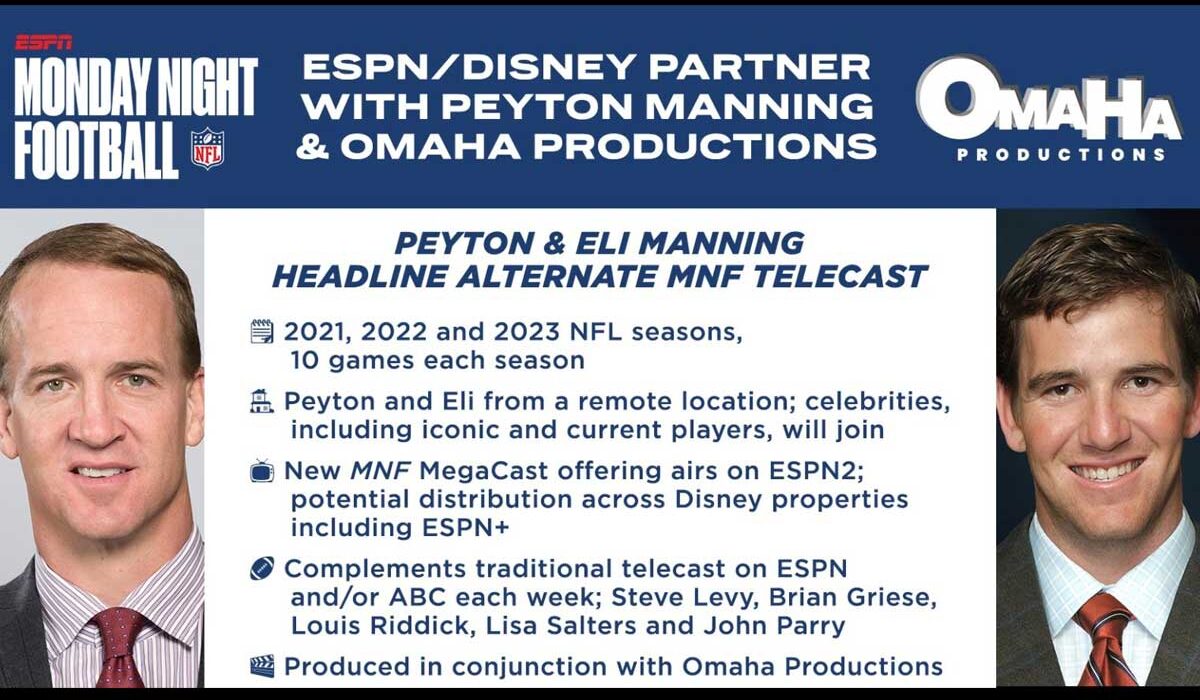 ESPN and The Walt Disney Company have reached an unprecedented partnership with Peyton Manning and his Omaha Productions company that will result in a first-of-its kind Monday Night Football MegaCast production, featuring both Peyton and Eli Manning. Peyton and Eli, combined four-time Super Bowl champions, will headline the new additional viewing option starting with the 2021 NFL Season through the 2023 season (a total of 30 games over 3 seasons).

Each Peyton and Eli-fronted MegaCast will be distributed on ESPN2, with potential for additional distribution on other Disney properties including ESPN+, complementing Monday Night Football’s traditional telecast, which will continue to be available on ESPN and/or ABC each week. Together, the two viewing options will expand the reach and audience of the historic NFL television franchise.

“Offering multiple Monday Night Football viewing options for the next three seasons continues our innovation efforts and provides additional value for our fans,” said Jimmy Pitaro, Chairman of ESPN and Sports Content. “Peyton and Eli will bring a different approach, delving into conversation about broader, big-picture topics while also honing in on the game, much like fans do when watching with their family and friends.”

Produced by ESPN, in conjunction with Omaha Productions, the unique MegaCast option will originate from a remote location. Fans will be treated to a mix of in-the-moment analysis, big picture NFL dialogue, knee-jerk reaction, historical perspective, and more. Peyton and Eli will be joined each week by a to-be-determined host. Iconic and current athletes, as well as celebrities, are expected to appear throughout the season. Fans will never miss any of the action, as a multi-box viewing experience will ensure the game is always visible.

“This partnership with ESPN and The Walt Disney Company reflects an ongoing, shared commitment to offering fans fun, innovative content,” said Peyton Manning. “ESPN+ has been a terrific partner for Omaha Productions as we built out The Places franchise and we’re excited to co-create a new MegaCast format that will have something for everyone.”

This deal extends and enhances the meaningful relationship between Peyton, Omaha Productions, ESPN and The Walt Disney Company, one that formally began in 2019 with the launch of Peyton’s Places on ESPN+, produced by NFL Films. The show’s original concept, which celebrated the NFL’s 100th season and offered a fun, light-hearted dive into the moments, people and places that helped shape the sport’s history, has developed to become ESPN+’s most extensive franchise.  Five new series, executive produced by Omaha Productions and NFL Films, are in production and will debut over the next year. The new series are Abby’s Places, with Abby Wambach (soccer), Eli’s Places with Eli Manning (college football), Papi’s Places with David Ortiz (Major League Baseball), Rowdy’s Places with Ronda Rousey (combat sports) and Vince’s Places with Vince Carter (NBA). Abby’s Places first episode is available now.

As previously announced, Steve Levy, Brian Griese, Louis Riddick, Lisa Salters and John Parry return for their second consecutive season as a broadcast group and will be on the traditional call of Monday Night Football on ESPN. The commentary team will be onsite each week, including when fans are inside Allegiant Stadium for the first time for a regular season game in Week 1. ESPN’s full 2021 NFL schedule is available here.

“Steve, Brian, Louis, Lisa and John are poised for a great season, building upon the strong foundation they formed in a very successful first year despite the challenges brought about due to the pandemic,” said Pitaro. ““This new MegaCast option is designed to be a great complement to our traditional telecast.”

In addition to airing on ESPN and/or ABC, the traditional call of Monday Night Football will be streamed across devices on ESPN and/or ABC and NFL digital properties, and on mobile via participating club apps and Verizon Media mobile properties. ESPN Deportes will produce Spanish-language presentations which will be streamed across ESPN digital properties and Verizon Media mobile properties.

Peyton and Eli’s MegaCast broadcast will debut the first three weeks of 2021 MNF slate (Baltimore at Las Vegas, Detroit at Green Bay, and Philadelphia at Dallas) and continue seven other weeks during the season, to be announced.