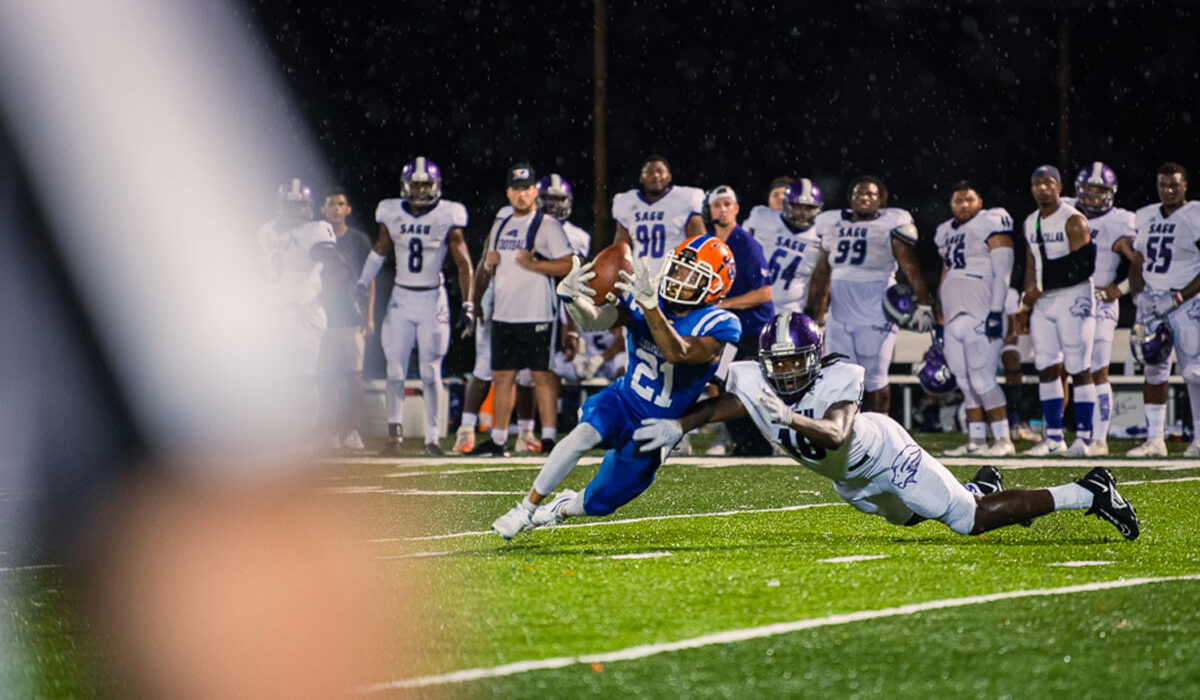 PINEVILLE, La. – The Louisiana College football team had itself in position to come out of its first ever Sooner Athletic Conference contest with a victory, but saw it slip away late as Southwestern Assemblies of God University scored a touchdown with five seconds left to drop the Wildcats in the SAC opener 20-13 to the Lions Saturday night at Wildcat Field.

The name of the game for most of the contest was defense as both teams struggled to get moving offensively. The Wildcats struck first in the second quarter as LC took advantage of an 18-yard punt that set the Wildcats up on SAGU’s side of the field, moving into the red zone before calling on Hunter Martensson from 36 yards out, which he converted to give LC a 3-0 lead.

But just about five minutes later, a SAGU offense that had been stymied for most of the first half hit on one big play, a 44-yard touchdown pass to take the lead with 8:30 to go before halftime, even as Gerald Burton blocked the point after attempt to keep the score at 6-3, which would be the halftime score.

Midway through the third quarter, the Wildcats knotted the game back up. Canaan Leon took an handoff on an end around play and ran for 43 yards to set up the Wildcats inside the Lion red zone again. However, the drive would stall and Martensson drilled a field goal attempt from 30 yards to even the score at 6-6.

With the game tied and now in the final 15 minutes, the Wildcats took the advantage first. After a quick three-and-out by the Lions deep in their own territory, a 29-yard punt set up LC at the SAGU 37. And all it took was one play for Devin Briscoe to get around the right edge, break two tackles, and stroll into the end zone to make it 13-6 LC with 11:42 left in the game.

But on the Lions first offensive play following the Briscoe score, SAGU connected on a 32-yard pass to begin a seven-play drive that ended with a 22-yard touchdown pass to even the score back up at 13-13 with just more than eight minutes left in regulation.

Both teams started to struggle moving the ball again as a light rain fell over Wildcat Field. But field position became a big ally to SAGU as a personal foul penalty following a punt backed up the Wildcats deep. A quick three-and-out and a 16-yard punt set up the Lions deep in LC territory with less than a minute left. And SAGU took advantage of the opportunity, going on a three-play drive that ended with a 15-yard touchdown pass with just five seconds left in the game to snatch the victory in the contest.

Devin Briscoe led LC’s attack on the ground with 16 rush attempts for 107 yards and a score. Canaan Leon had three rushes for 64 yards. The Wildcats as a team rushed for 244 yards in the contest.

It wasn’t the best of games through the air for the Wildcats as Sal Palermo III went six of 19 for 59 yards and an interception before leaving the game in the third quarter. James Powell, Jr. came in and went two of 12 for 46 yards. Canaan Leon added two receptions for 22 yards to his rushing and special teams totals to finish the night with 87 all-purpose yards. Tayvien Cole had a 42-yard reception to make him the top receiver in terms of yards gained.

Cole Jones was all over the place for the Wildcats defense, finishing the contest with 13 total tackles, seven solo and six assisted. 2.5 of his tackles happened behind the Lions line of scrimmage for a loss of yards, recovered a fumble, and broke up a pass. D’Mario Weathersby had five tackles, one for loss. Tyren Young forced the fumble that Jones recovered, and Bennie Clark III picked off the Lions QB.

The Wildcats (0-2, 0-1 SAC) head on the road for the first time in 2021 for their final non-conference contest of the season, a date with NCAA D-I FCS team Abilene Christian. Kickoff between the LC Wildcats and ACU Wildcats (0-1) is set for 6:00 P.M. at Anthony Field at Wildcat Stadium.