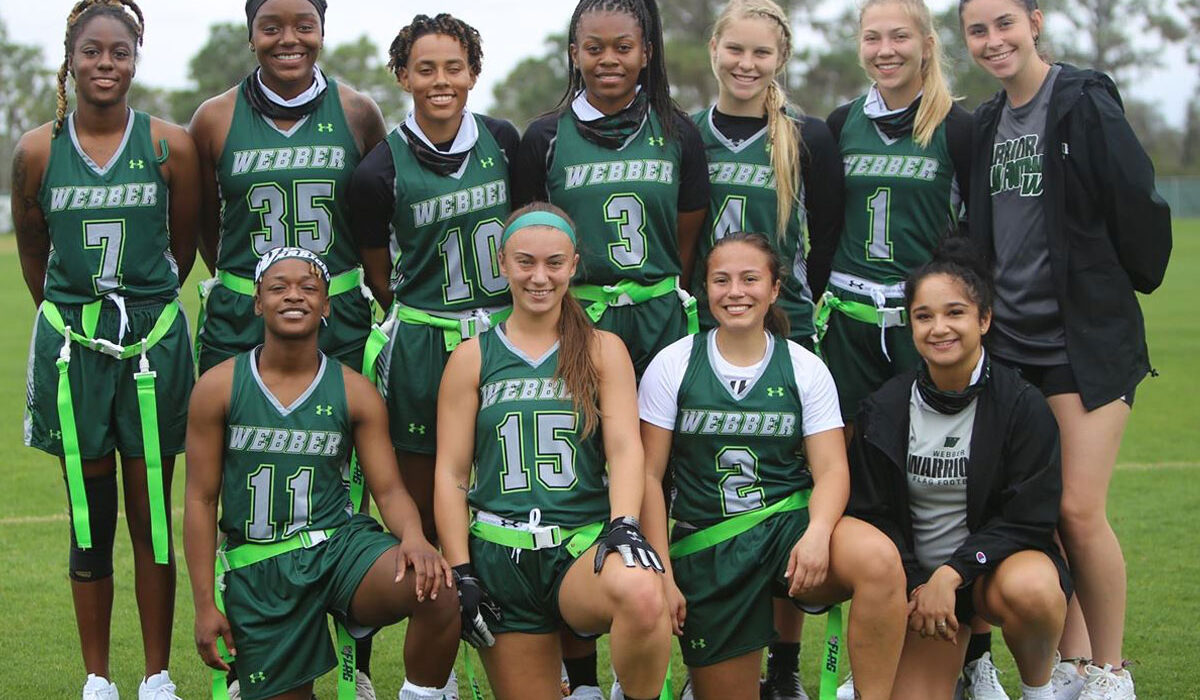 BABSON PARK, Fla. – On Saturday, February 13, 2021, Webber International University had the privilege of hosting the first ever collegiate women’s flag football event as the Warriors hosted three other NAIA teams for the Crooked Lake Kickoff on the Warrior Grass Field. The historic day started with a 52-0 shutout win for the Warriors over Midland University, and then it ended with a 6-6 tie for the Warriors against St. Thomas University after the final game of the day was suspended due to darkness.

In the first game against Midland, Webber’s freshman quarterback Sierra Harris accounted for six total touchdowns (4 passing, 1 receiving, 1 rushing), completing 21 of her 27 passes for 188 yards while also running for 55 yards.

At halftime, the Warriors led 20-0 before outscoring Midland 32-0 in the second half.

The last touchdown of the game was an 11-yard touchdown pass from Garner to Harris.

Defensively, the Warriors were led by Garner with 10 flag pulls, one tackle for loss, and an interception that she pitched off for a pick six.

In the final game of the day against St. Thomas, the two teams put together a defensive battle that lead to a 0-0 score at halftime.

Then in the third quarter, Kayla Burrows rushed in from 26 yards out for the first touchdown of the game, but with only 2:45 left in the fourth quarter, the Bobcats connected on a go-route to tie the game and break Webber’s stretch of shutout quarters to start the season.

Garner once again finished with 10 flag pulls while Harris added a great pass break up in the first half.

The player of the game offensively for Webber was Burrows, who finished with three catches for 46 yards receiving while also adding 33 rushing yards.

Webber’s Head Flag Football Coach Jeffery Melesky said, “It was a great day for women’s flag football, and it was an honor to be a part of the first ever sanctioned women’s collegiate flag football game. I am very happy for our players and fans that we were able to bring more light and awareness to this great sport. Sierra Harris and RayGene Garner led the way for the Warriors today, showing great poise and leadership both on and off the field. I know what this sport means to the two of them, and for them to connect on the first touchdown ever in the sport makes me proud. I am also very thankful for the other three teams that joined us for the first annual Crooked Lake Kickoff, and hopefully this becomes something we will do on a yearly basis. We are looking forward to the competition the rest of the season brings us, and we are proud to be a part of history.”

In the other two games on the day, Warner University defeated Midland 42-8, and then St. Thomas defeated Warner 13-6 in a defensive battle.

The overtime period between Webber and St. Thomas will be made up on Saturday, February 27, when the Warriors next play the Bobcats in West Palm Beach, Florida.

Next weekend, Webber will host two other teams for three games on Saturday, February 20. The Warriors will play the University of Florida club team at 1 p.m., and then after Florida plays Warner, the Warriors and the Royals will battle for the first time this season at 4 p.m. The game between Webber and Warner will also be the inaugural Sun Conference game for the Warriors.