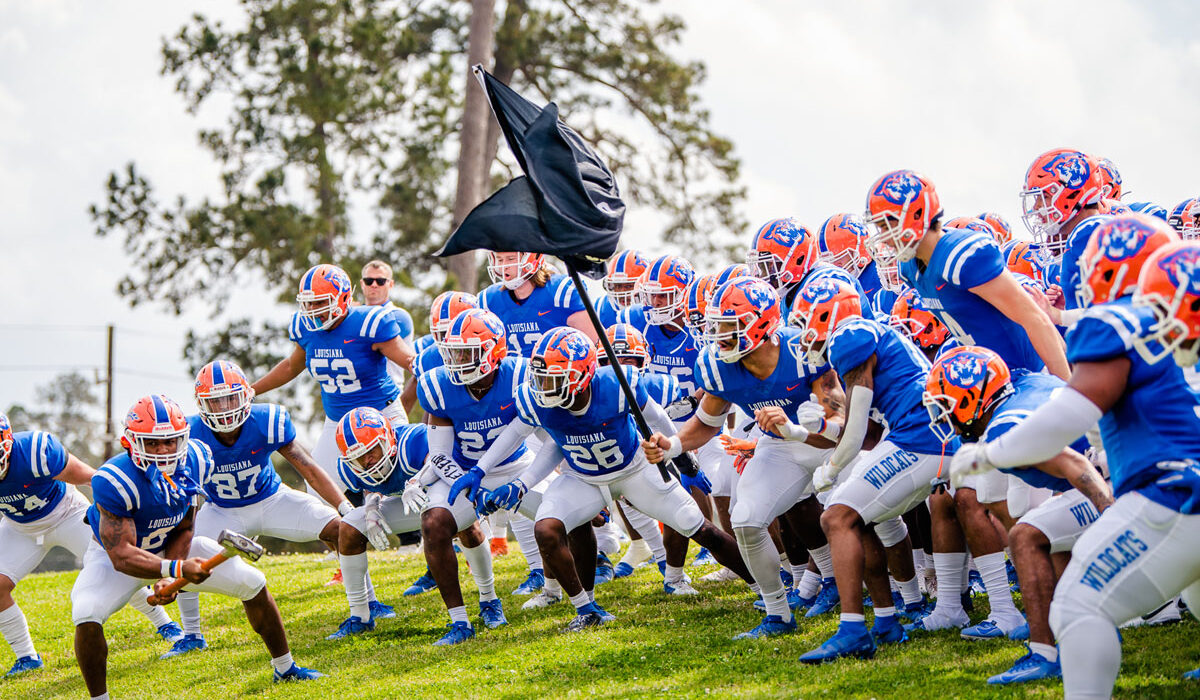 “To say Coach Mason and I are excited about this next chapter in the history of Louisiana College athletics would be an understatement,” said Louisiana College President, Dr. Rick Brewer. “Returning to the NAIA brings with it athletic scholarship, familiar opponents, an enhanced student and fan experience, and opportunities for competing for national championships in all sports. I am confident we will field a competitive football team this year under the leadership of Coach Drew Maddox. Claws Up!”

“I am really ready to see how much more we have grown as a program,” said Louisiana College Head Football Coach Drew Maddox. “Going into a new conference has its pros and cons, but we are really just ready to see if we can be more consistent and get better everyday.”

LC’s first season in the NAIA begins on August 28 with a pair of home games to open a six-game slate at Wildcat Field, the first being a non-conference contest against a team that could become a more familiar opponent, North American University out of Houston, Texas.

That’s followed the next week by the Wildcats’ first foray into the Sooner Athletic Conference as the Lions of Southwestern Assemblies of God University comes to Wildcat Field for a night contest.

The next week starts the first of two long road trips as well as the final non-conference game of the season and the only game against the NCAA Division I opponent as LC heads to Abilene, Texas for a Wildcat battle against Abilene Christian on September 11. Following the game at ACU, the schedule fills out with the rest of the SAC schedule.

“Let the NAIA era begin,” said Louisiana College Athletic Director and Head Men’s Basketball Coach Reni Mason. “I have full confidence in Coach Maddox and his staff. They have shown the ability to be diligent and consistent in their approach to recruiting, player development, and game preparation. The future is very bright for the Wildcats.”

The longest road trip of the season comes on September 18 as the Wildcats head to Glendale, Arizona to take on the defending SAC Champion, Arizona Christian.

Following two long road trips, LC comes home for two straight games, the first against Ottawa of Arizona on September 25 and then the Aggies of Oklahoma Panhandle State come to Wildcat Field on October 2.

After the lone bye week of the season, the Wildcats return to action on the road at Wayland Baptist in Plainview, Texas on October 16. That’s followed by another road game in Fort Worth, Texas against the Texas Wesleyan Rams.

A brief home respite sees the Langston Lions come to Wildcat Field on October 30 to close out the spooky month. That’s followed by a road trip to Arkansas for a battle with the Lyon Scots. The regular season ends on November 13 at home as LC welcomes the Texas College Steers to Wildcat Field.

The 66th Annual NAIA Championship Series starts the following week, on November 20, with a national champion decided. On December 18 at a site still to be announced.

Season tickets are on sale now. All season ticket seats are in the chairback seat section of Wildcat Field. With cash or check, the cost is $100 for two tickets to all six home games with checks made payable to Louisiana College Athletics. Credit card customers can pay by visiting the ticket pricing page on the athletics website where the price is $115 for a pair of season tickets. At the gate, the price for admission to a game is one flat rate of $15.