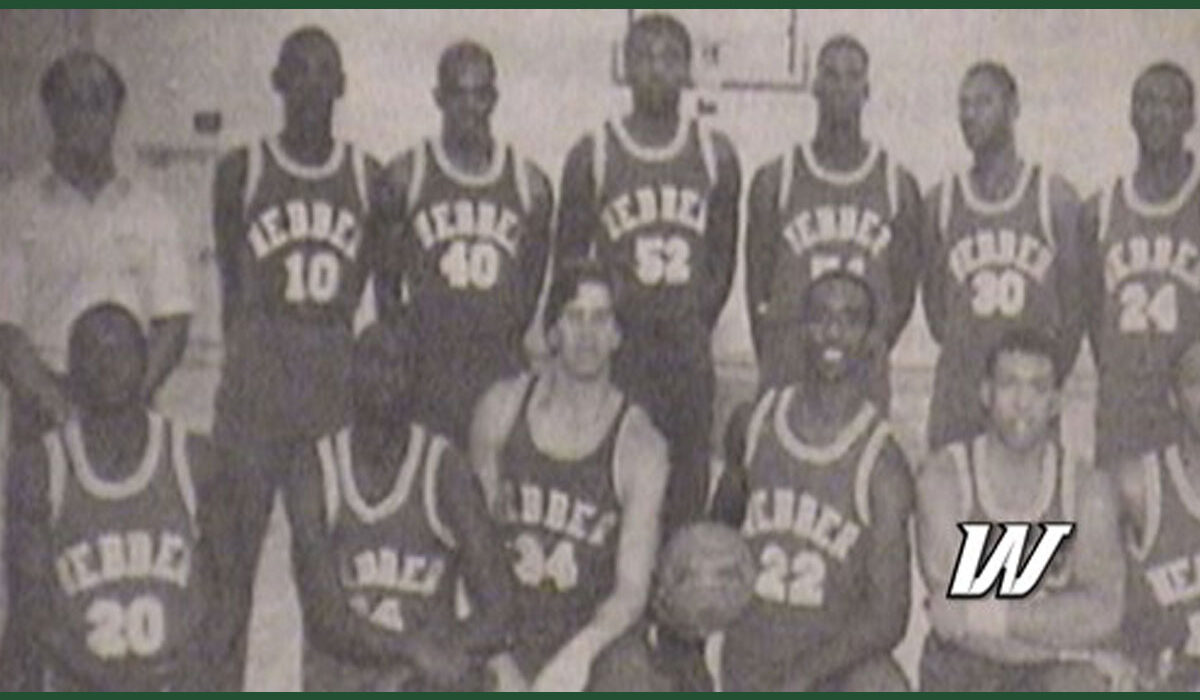 BABSON PARK, Fla. – The 1983-84 men’s basketball season at then Webber College was a year to remember.

The team was started as a way to get publicity for the school by President Buck Cleven, who wanted a nationally-renowned basketball team to gain some notoriety for the college.

To accomplish this, Cleven brought in Coach Nick Creola from Jamestown Community College, located just south of Buffalo, New York. Within four months’ time, Coach Creola brought in players from places such as New York, Baltimore, and Buffalo down to the middle of Florida to a carpeted gym with no air conditioning.

Joining Creola on the bench was assistant coaches Danny Olson; Steve Prevesk, who also filled roles such as the radio announcer, manager, statistician and sports information director during his time at Webber; and future WIU legend and Athletic Director Bill Heath.

“Myself, Danny Olson, Carl Jeter, Artie Gilbert, Tony Briscoe, Gary Jefferson and Willis Richardson all came with Coach Croela from his previous school in New York,” said Prevesk. “When Coach Creola brought us with him, as a kid from the snow belt of Buffalo, I thought I was coming to palm trees, beaches, Disney World and nice weather. What I was met with was orange groves and a school that was in the middle of nowhere and was at least 90 minutes from any major city. I will always remember the first time I saw a palm tree. Minutes later I saw my first confederate flag. I had never seen either one my entire life. It was all such a culture shock. There was a saying when we first arrived at Webber that people told us: ‘Starting from Miami, the further north you go in Florida – the further south you really get.’ That was exactly right.”

In their 1983-84 season, the Warriors went an incredible 34-5 and won the National Little College Athletic Association National Championship. Their trademark was an alley-oop play from half court.

The following season in 1984-85, Webber joined the National Association of Intercollegiate Athletics (NAIA) and went 32-5 overall while advancing to the district semifinals of the NAIA. At one point during the regular season, the Warriors went to Hawaii and defeated NCAA Division-II Chaminade, which had knocked off national powers such as Louisville and Southern Methodist. Unfortunately, among the ten Division-II schools within a 90-mile radius of Webber, not a single one of them would play Webber.

Prevesk said, “Although nobody big would play us, when we would go on the road, we would pack gyms because so many people wanted to see us play. Fans loved our warm-up routine. Rodney Jones would jump and could hit his head on the rim. Everybody on the team dunked, it was awesome. We had teams beat before the tip. We actually really enjoyed the road trips. It just seemed more normal than being in the environment we were in at Webber.”

If all of the Warriors’ accomplishments from a team perspective were not impressive enough, Bronaugh went on to finish the 1984-85 season second in the NAIA in rebounding behind guess who, future NBA superstar Dennis Rodman.

Bronaugh said, “Finishing second in the NAIA in rebounding behind only Dennis Rodman is something that I will always be really proud of. I started following Dennis’ stats and he’d have a game where he had 29 rebounds, and then I would go out and pull down 22 rebounds. I did that once, but Dennis did it on a regular basis. However, we also led the nation in field goal percentage at around 64 percent, so there weren’t as many rebounds for me to get. We just didn’t miss sometimes.”

During the very next season in 1985-86, the program’s final season before being reinstated years later, Webber only lost once during the regular season (24-1) and finished the season 29-2 overall. The Warriors averaged more than 100 points per game to lead the nation in scoring, won their district championship, and were seeded fifth in the NAIA National Tournament in Kansas City, Missouri, before falling in the first round by only four points (80-76) against Southwestern (Texas).

“When we won the district championship, it was really the first time in my life I had ever won anything,” said Bronaugh. “I will never forget it.”

“Playing at Webber from 1984-86 were my best years ever as a basketball player,” said Cromartie. “I remember fans would come from surrounding towns Lake Wales, Winter Haven, Haines City, and Avon Park. Having great teammates and long life friends still today, I wouldn’t trade those years for nothing. Playing in the school’s first ever appearance in the NAIA Men’s Basketball National Tournament is something I will always cherish. Players like Dennis Rodman and Scottie Pippin are just a reminder of how good teams were during that era. Webber will always hold a special place in my heart because my time there helped develop me into the man that I am today. I can truly say those were the good old days.”

In just three years, the Warriors went 95-12 overall with one national championship under their belt followed by an NAIA District Championship two years later.

Prevesk said, “Three years later when Buck cancelled the program and we played our last home game, we had our first sellout crowd. Our team changed the entire fabric of the school and the community and laid the groundwork for every future athlete to ever play a sport at Webber. That’s why that team is important and that’s what a lot of us will take away. From the disdain and mistrust everyone had for us to the very emotional goodbyes three years later. That’s why those core players from those teams are so important and that’s the true legacy of the team. Yes, it was a bittersweet ending. We finally had earned the respect we so desperately craved by moving up to NAIA and in 1985-86 we were ranked in the top five in the nation. The national tournament was held at the Kemper Arena in Kansas City. Coach and I had several conversations about getting some practices in at an arena in Tampa. He was concerned about the depth perception of shooting in an arena compared to a gym but we never did. It was a big mistake. We shot horribly and lost in the opening round. I think if we could’ve got by that first game we would’ve gone to the finals. The players all talked about what a big difference it was. Add that fact there were about 17,000 people there, it was a big difference.”

“Our teams in the mid-1980’s put Webber athletics on the map,” concluded Cromartie. “It is as simple as that. We received attention not only in the state, but nationally as well. We were in a tough area in the middle of nowhere in Florida, but we were considered one of the best basketball programs in the NAIA at the time. Going to the NAIA national tournament and being a part of the Parade of Champions and to hear on the loud speaker, ‘Representing District 25 and making their first ever appearance at the NAIA National Championship, with a record of 29-1, the Webber Warriors’, it was that moment where we felt we had arrived. It was something movies are made of. “

“We were just a bunch of talented guys that got along for the most part and learned how to play together as a team,” added Bronaugh. “I will always remember going to Hawaii, making lots of friends, having fun at the Webber dances, and meeting Ben Hill Griffin and Royce Godwin for the first time. I am very thankful to Coach Creola and President Cleven for giving me a chance to get an education and to play basketball. I called Dr. Cleven after Coach Creola died about 20 years after he left Webber. He was blind and I told him thank you, and I told him that he made a difference in my life and in a lot of our lives. He was happy to know that I was doing well.”

Do you know the story of how the gym at Webber got its name?

“When we first arrived, coach’s office was in a maintenance shed,” said Prevesk. “The gym was carpeted with no air conditioning. It was 110 degrees in there during practice. Red ants would eat our legs up; players would wring their socks out with sweat at the end of practice – it was brutal.  Well, two sons of one of the richest men in the world attend Webber when we got there. Suhail and Sumir Sabbagh from Kuwait. After we won the National Championship, Suhail and Sumir loved being around the team so much that they asked their father for money for a new gym for the players and that’s how it got the name.”

“It was very exciting and humbling to be a part of a basketball program where losing was just not an option,” said Cromartie. “To play in the first ever game inside the Sabbagh Athletic Center was just awesome. We watched them build that gym with anticipation, and then to play there against our sister school Babson College from Massachusetts in the first game in our new gym and beat them was just an incredible experience. Even though we weren’t Division-I, I played with some incredible basketball players that made everything we went through worthwhile, and we all love each other and stay in contact to this day. What I think about the most when thinking back about that team was how we came together and bonded as young men for one cause, and that cause was winning. All we ever wanted to do was play basketball, and Webber gave us that chance.”

The Greatest Team You Never Saw

They were often referenced to as the “greatest team you never saw,” and they even tried to make a movie out of it. The phrase even popped up in Mitch Albom’s Detroit Free Press Column on March 28 of 1986, titled “Greatest Team You Never Saw Season’s End Means the End of Webber College’s Seasons.”

“Mitch Albom is one of the preeminent authors of our generation,” said Prevesk. “He has several bestsellers, has had three movies made based on his books and is Oprah’s favorite author. His article on our Webber team is in his book ‘Live Albom’, and to this day he calls it one of the most memorable stories he has ever worked on. The article was syndicated throughout North America and he received thousands of letters on the story.”

Prevesk finished by saying, “A few months ago before the virus hit I was in a LA Fitness and ran into a guy who went to Webber. I showed him my Webber National Championship ring and he was blown away. He never knew about those teams and I don’t think there is anything on campus that recognizes us any longer. I think students past and present would be stunned to know how close Webber was to being part of movie history. It still may be, you never know.”