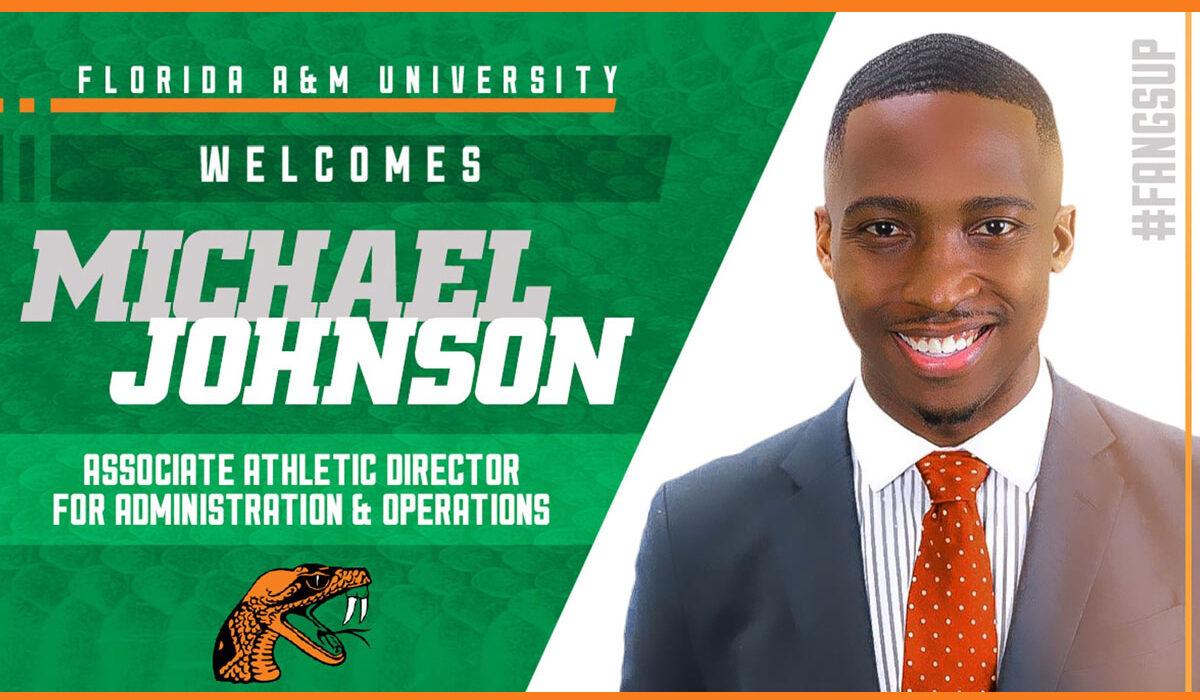 “We are excited to welcome Michael Johnson to our administrative staff,” Gosha said. “As we implement our strategic plan and vision for Athletics, it was imperative that we identified a high-energy creative thinker and dynamic professional with a lense of experience as a former student-athlete, student-leader, and athletic administrator to oversee all of our events, facilities, policy management and internal operations.

“Mr. Johnson has already jumped in with two feet by spearheading our field house renovations, softball artificial turf installation, scoreboards, and entire departmental rebrand efforts. His passion to create a unique student-athlete experience has unequivocally identified him as a rising star in the industry.”

“I am elated to bring my Tiger blood to Rattler Nation,” Johnson said. “Serving a premier university like Florida A&M University is a tremendous honor and incredible responsibility that I do not take for granted. The positive trajectory of this administration is second to none and I am proud to be an instrumental change agent serving alongside an extraordinary team of professionals.

“As a product of an HBCU, I understand how imperative it is to serve at an HBCU and give back to the culture whom afforded me access and opportunities. I am prepared to build champions of life in Tallahassee and grateful to serve at the highest of seven hills. I stand ready to Strike, Strike, and STRIKE again to unprecedented heights.”

A native of Flint, Mich., Johnson is no stranger to the Power 5, Mid-Major, FCS, or HBCU communities. He comes to Florida A&M after serving as the Assistant Athletic Director for Operations and Facilities at McNeese State University. Johnson will oversee internal operations, sports medicine, equipment operations, strength and conditioning, contracts, facilities and all athletic events, including postseason competition. Additionally, Johnson will also assist with football and basketball, while serving as the primary sport administrator for baseball and men’s track.

Johnson hit the ground running in his role at McNeese, where he oversees all aspects of McNeese game day operations, management, and facilities for all 15 sport programs. He was responsible for day-to-day facility and maintenance, internal operations, planning team travel, information technology, access control, grounds, custodial, officials, playing surfaces, police and security, concessions, 60-plus game workers, and all capital projects. Additionally, Johnson coordinated efforts with the ticket office to maximize ticket sales and drive revenue for athletic programs; while hiring, training, and scheduling guest services, contractors, staff and student interns.

Johnson implemented the first-ever facilities management system for the athletics department that was also adopted by the McNeese campus facilities team. Additionally, he established policies and procedures for credentials, crowd control, and emergency management for the Cowboys. Johnson oversaw all capital projects for McNeese Athletics, directly overseeing the renovations to McNeese’s largest capital projects: the $41-million Health and Human Performance Arena, the Joe Miller Ballpark Enhancement Project, Doland Fieldhouse renovations, and the upcoming videoboard and light replacements at Cowgirl Field, Henning Track and Field Complex, and Cowboy Stadium; working directly with each head coach and the Director of Athletics. In addition to his official capacity, Johnson also served as a board member for the Fellowship of Christian Athletes’ Louisiana Region and Chairman of the Diversity United Foundation.

Prior to joining the Cowboy family, Johnson served as the Coordinator of Game Operations and Facilities at the University of Miami. As a Hurricane, he coordinated all athletic and external event functions, implemented a brand new facilities management system (FMX) and coordinated capital projects such as the replacement of the Greentree practice fields, the tennis video board replacement, Knight Gym floor replacement, and Phase 2 of the $47 million Carol Soffer Indoor Practice Facility; directly working with multiple outside vendors, staff, and partners.

Before his stint with the Hurricanes, Johnson served as the Executive Coordinator of Athletic Operations at Middle Tennessee State University, where he assisted and coordinated the negotiations for the department’s licensing rights, renegotiating a contract extension with apparel provider Nike valued at $10 million, coordinated several million dollars in capital improvement projects, as well as directly assist the Director of Athletics with day-to-day operations for MTSU’s 17 varsity programs.

Johnson was the direct liaison for police, game officials, risk management, policy management, equipment operations, and the external arm for other agencies. Additionally, he oversaw the review and payment of team travel expenses and led multiple vendors, staff, and partners to provide clear and concise planning and communication to all service providers; as appropriate for each event and/or planning phase of the athletic calendar. Johnson wrote and established the operational policies and procedures for the Blue Raiders, writing a policy that led to the implementation of alcohol sales at athletic venues at MTSU; making it the first institution in Tennessee to serve alcohol on campus.

While at Tennessee State, Johnson was named Mr. Tennessee State University, a student-body elected position that serves as a liaison for the student population under the leadership and direction of the university President, Dr. Glenda Baskin-Glover. Johnson gained valuable experience in Intercollegiate Athletics operations as a graduate assistant at TSU. He is a former track and field student-athlete coached by legendary Olympic athlete and coach Chandra Cheeseborough.

A graduate of Tennessee State University, Johnson studied Pre-Law and earned his Bachelors and Masters of Criminal Justice with a concentration in Law. In addition, Michael worked for the United States Department of Defense, where he collaborated with hiring managers and company presidents to strategize and implement innovative pipelines to employ students, athletes, and veterans from collegiate populations; assisting them with earning federal internships and full-time careers with various federal government agencies. Prior to DoD, Michael worked for the State of Tennessee’s General Assembly.

Johnson also has memberships to the Collegiate Event and Facility Management Association, Minority Opportunities Athletic Association, 100 Black Men, and Alpha Phi Alpha Fraternity, Inc. In addition to being involved in the community, Johnson has made a career of empowering, connecting and marketing youth culture by exposing his peers and young adults to their untapped potential and unchartered opportunities. Thus, he founded his non-profit organization, where his mission is to create pipelines of access to resources and opportunities for diverse underprivileged communities in schools, workplaces, sports, and health; pioneering diversity in every career field.